To create a new ACD group: 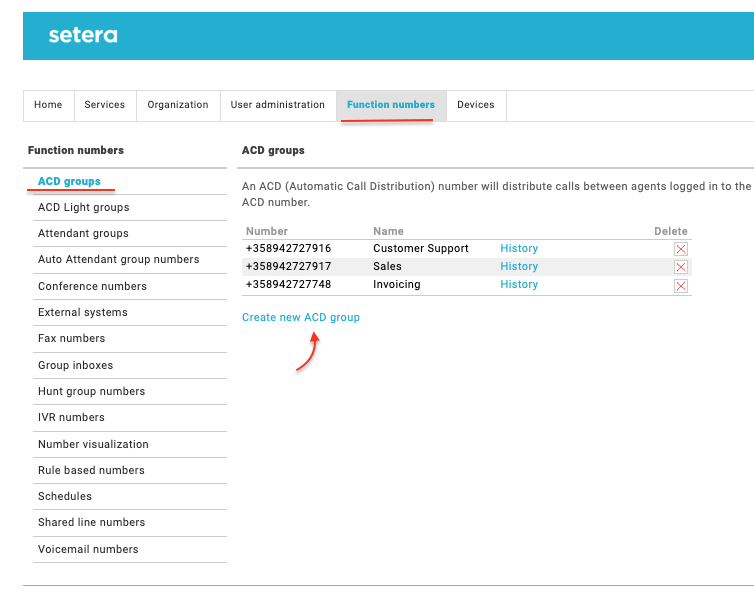 If an agent is logged in then the call stays in the queue. If no agents are logged in the call is forwarded to a fallback number. If an agent is not available according to the activity (presence state) the calls will stay in the queue. The administrator can select specific settings to cause the calls to be forwarded to a fallback number.

In the distribution of calls section, the following options are available:

Calls are distributed in an ordered prioritized list. It will always try to call the agent in the top of the list if that agent is logged in to the group.

Add agents to the ordered list by searching for them in the search field. You can change the priority of the list by pressing on the up and down arrow. Calls will be distributed from top to bottom.

If an agent logged in to the answer group is not part of the ordered list, they will be considered of lower priority than the listed ones.

The distribution prioritization for the agents is thus the following for the first call in the queue that will be distributed:

To add skills to a user:

User skills cannot be added when the group is created. To add user skills the group must first be created and then be edited by selecting from the list of configured groups.

This setting does not affect a caller entering an empty queue.

If a value is also specified for After how many seconds of ringing should call go to next agent" (under Distribution of calls), the lower of these two values will take precedence

The possible choices for voice prompts are:

When an incoming call to the system has been directed, for example by a previous IVR menu, ACD group, or as a fallback number, it is not always that the redirection number is shown. This means that the receiver will only see the external number on the display and not why the call was routed there.

When you apply Enforce use of group number as redirecting number, the system either shows the redirection number to the endpoint or the calling party number, depending on how the Number Presentation is configured for each number involved in the redirection. To understand this, let us look at an example. A call is received on an IVR number and is forwarded to an ACD group called ACD1. The call does not get answered by any of the agents in ACD1 and so gets diverted to another ACD group called ACD2. When user A, who belongs to ACD2, receives the diverted call, the "diverted by" number, as seen by user A is displayed based on how Number Presentation is configured for ACD1 and ACD2.

As seen in the example, the configuration on the second number takes precedence over the settings configured on the first number.

When the redirection cannot be shown, for example when the call is forked to a mobile, you can choose to either display the group number or the calling party number.

In order to see both "Redirected by" and "Distributed by", the Softphone attendant view must be used.

Otherwise only the previous redirection will be shown.

Redirections by users will be shown for:

This section configures callback settings for the ACD groups with a call-back option.

Let us look at a scenario with the following parameters configured:

If an agent is not free, it will wait for 20 minutes for the agent to be available. If an agent is unavailable within this time, the callback is cancelled.

If an agent is free and the system tries to callback the caller it follows:

The number that the caller provides for the callback call will be checked against the call barring rules for the organisation. An prompt will be played to say that the number is invalid if not allowed by call barring. There is also numbers on system level that may not be allowed for callback.

Did you find it helpful? Yes No

Send feedback
Sorry we couldn't be helpful. Help us improve this article with your feedback.